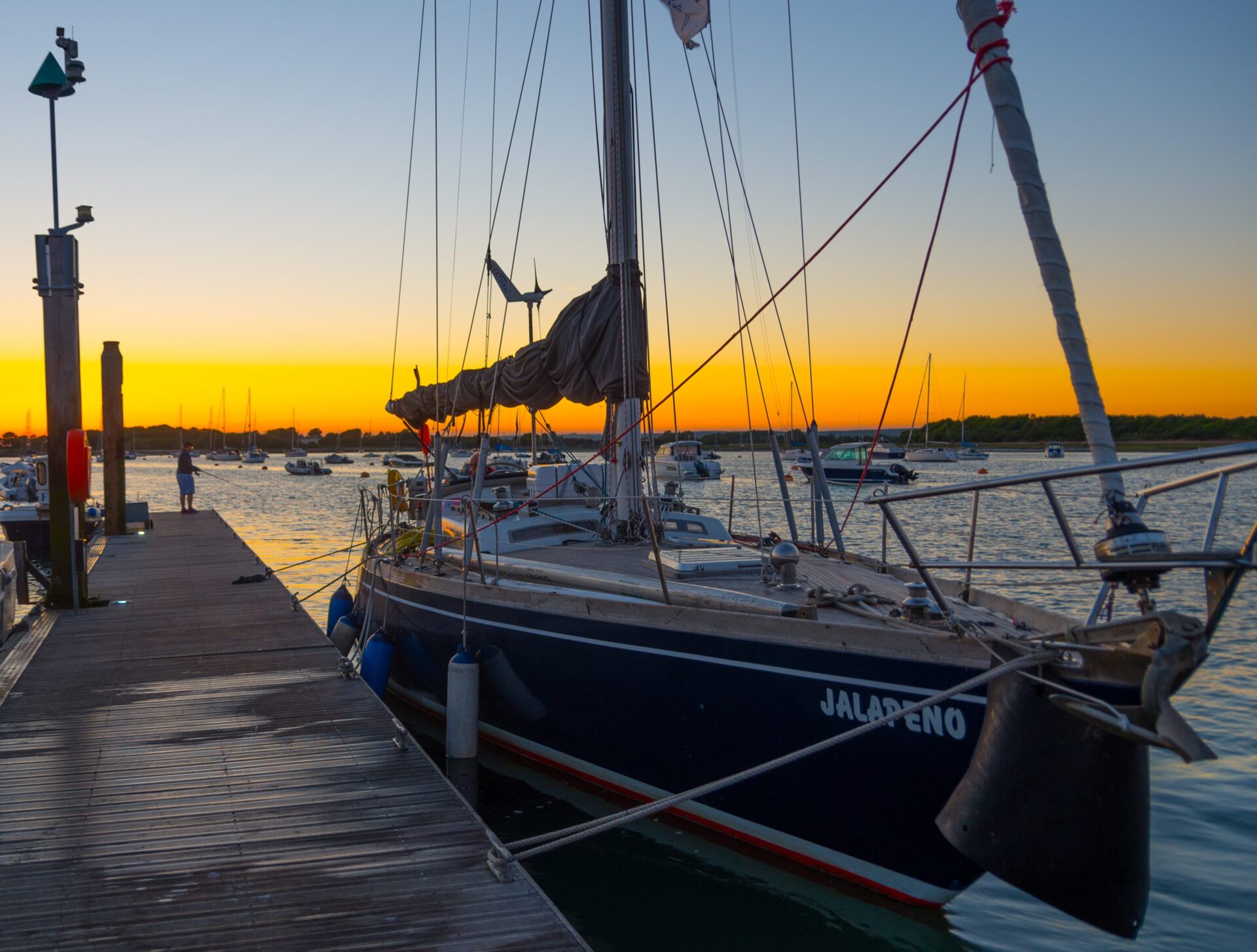 The Round the Island Race (round the Isle of Wight, just in case you’re not familiar with it) has been running since 1931. This year, conditions were perfect and a new course record of 2 hours 22 minutes 23 seconds was set by the trimaran Concise 10. We weren’t anywhere near that but, just under 10 hours after we started, we crossed the finishing line – what would be our position?

The weekend had started as normal on the Friday morning at Itchenor. Also following a familiar pattern was the appearance of another new crew member! Our new skipper for the Fastnet, Jake, joined us for the first time. Jake’s been sailing since before he could walk and was in the UK youth Laser squad before moving on to crazy single-handed ocean racing in his self-built mini-Transat 6.50.  He’s sailed around the Fastnet rock several times but never as part of the Fastnet race and brings a wealth of racing experience. Mike was at a wedding so we were 7 for the race – Jake, Ben, Dhara, Trevor, James, Farouk and me.

We didn’t hang about for long at Itchenor, motor-sailing gently down the Chichester Channel and up the Solent to Cowes, on the way discussing the intricacies of spinnaker hoists, gybes and drops. The wind was north-westerly force 3-4 and the sea state calm, good conditions for spinnaker practice, and so we turned downwind just west of Cowes and set to work, rotating roles so we’ll all understand and be competent in each aspect when we’re on the Fastnet.

We were booked into Cowes Yacht Haven and were lucky to be the last to arrive on our pontoon; we rafted up as the outermost boat, which meant we wouldn’t have to wait for anyone in the morning or have footsteps over us all night.  As you might expect, Cowes was heaving!  1400 boats with an average of 10 crew plus visitors – that’s a lot of extra boats and people.  Nonetheless, we found a delightful, quirky Indian restaurant on the High Street and had a sensibly early night.

Saturday – race day – dawned rather grey and a little chilly, but clear skies were forecast for later.  We also had three new crew members – Roy, Paula and Gail joined us for the day and brought a surprising degree of chirpiness for 5am!

So many boats! Starts were every 10 minutes from 5.30am till 7.10am and there were yachts of all shapes, sizes and competence jostling for position, with shouts of “Starboard!” echoing all around…  Our big new genoa, on its second outing after the Morgan Cup, didn’t give us great visibility so Farouk took the lookout position on the pulpit, doubling as figurehead and bow fender!

The Round the Island Race goes anti-clockwise so we headed west from Cowes. Jake found us some clear air and kept us away from danger before handing over to James to fetch comfortably down to the Needles. Things got a bit crowded as boats gybed and hoisted spinnakers round the rocks and we headed down to St Catherine’s Point, the southernmost tip of the island. It was a beautiful, spectacular sight, hundreds of yachts with multi-coloured spinnakers flying in bright morning sunlight.

After a bit of port-starboard silliness by others at the start of the leg, James and Trevor decided that they wanted to be fresh for the second half so headed off down below while the boat was on a nice even keel, helped by our three day crewmembers who were doing a first class job of camping on the rail! Conditions were perfect for Farouk, who’d been relieved of bow duties, to practise his trimming, easing the sheet until the spinnaker luff started to curl, and then grinding it back in on the winch; ease, grind, ease, grind…

Two hours later we gybed round St Catherine’s point and found ourselves on a fine reach heading up towards Sandown Bay, just managing to keep the spinnaker flying, dropping it as we hardened up towards Bembridge.  And then it was tack-tack-tack up to the Forts, keeping away from the shallows off Ryde, criss-crossing with countless other yachts trying to work out how best to buck the tide that was now flowing against us as we made our way back to Cowes.  The wind was easing too, of course – “I don’t believe it – foul tide and no wind at the end of the race – how often does that happen?!” quipped Dhara.

We decided to head over to the mainland, out of the main tidal stream and into clearer air, taking a close look at the little Stokes Bay Sailing Club youth dinghies as they zipped around the buoys.  Things got a little crowded again as we neared the finish and had to put in a few tacks.  We crossed the line at 4.11pm, 9 hours and 51 minutes after the start.

It was good to arrive back in Cowes at a reasonable time so we could freshen up and enjoy the evening’s festivities, prior to a gentle sail with a little more spinnaker practice back to Itchenor on Sunday morning.

I nearly forgot – what was our finishing position?  We were quite pleased to find that we’d finished in 418th place.  Top third – we’re getting better.  Star Wars Episode 7 is The Force Awakens – I think some competitive spirit is awakening in this crew 🙂

Next up – the Channel Race on 22nd July, last one before the Fastnet on 6th August!

April sailing in the Solent