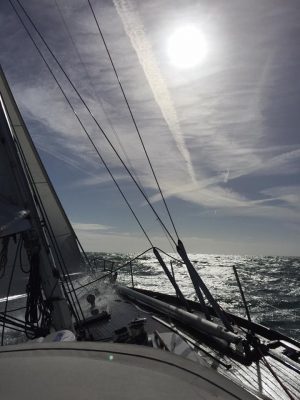 Regular readers may have noticed a Star Wars theme to the titles of the last two blogs. I was wondering how to twist “Episode 6 – Return of the Jedi” to fit our marathon trip to Guernsey and could only come up with “Return of the Jaded”, but this doesn’t accurately reflect our feelings at the end of an exhilarating run back to Itchenor (of which more later). Yes, we were tired, very tired, but definitely upbeat. Maintaining the science fiction theme, perhaps “Sleep – the final frontier” might be more appropriate?

Anyway, here we go – The Morgan Cup weekend. The event dates back to 1929 when the cup was donated by a member of the Morgan family (of JP Morgan fame) and is traditionally a cross-Channel race.  It’s designed to last 24-36 hours and starts on a Friday evening from Cowes. With at least one night sail and a distance of up to 160nm, the race is good preparation for crews planning to do the Fastnet.

We gathered on Friday morning at Itchenor. There were a few new faces and some missing ones – Jason had withdrawn for health reasons and Luke, Mark, Phil and Woody had also decided not to continue with the Fastnet campaign.  Dhara, Trevor, James and I were happy to be joined by Ben, Mike and Farouk. Ben is Sail Boat Project’s Chief Instructor and very familiar with Jalapeño, Chichester Harbour and the Channel.  Mike’s a trans-Atlantic two-timer who recently completed his Coastal Skipper qualification with Sail Boat Project (SBP) and Farouk is a regular SBP volunteer. Farouk is also in his early twenties, bringing very welcome energy and sleep-deprivation-resistance!

We spent the first few hours getting to know each other, refamiliarising ourselves with Jalapeño and going through the plan for the race. There was quite a lot of discussion about watch patterns as the old Navy four-on-four-off that we tried on the De Guingand Bowl Race didn’t give us enough rest time. We settled on trying 3-3-3: 3 hours off-watch followed by 3 hours on stand-by and then 3 hours on-watch.

We motor-sailed gently over to Cowes and went through the normal pre-start routine of circling the committee boat displaying items of safety equipment – this time our air-horn and radar reflector – before focusing on the start. A westerly force 4-5 and a downwind start meant that we had to be careful not to overshoot the line as we headed for the Forts at the eastern end of the Solent. Ben guided us calmly and confidently away from Cowes and we settled into our watch system, with James and myself first up, taking Jalapeño past Bembridge and round the Nab Tower before heading south into the Channel as the sun set at the end of our watch.

The two night watches – Dhara/Mike and Ben/Trevor/Farouk – had the fun of taking us most of the way through the shipping lanes, as the big ships made their way between the Traffic Separation Schemes at the eastern and western ends of the Channel. The watches were mostly uneventful apart from a sharp tack to avoid a head-on collision with another yacht – we were on starboard but it seemed they hadn’t seen us under their genoa.  James and I resumed at 3.30am on Saturday to do the last bit of weaving past the tankers and container ships and were lucky to see the sunrise before we headed below for some rest.

Sailing conditions continued to be almost perfect and we made good progress south-west towards Guernsey, leaving Alderney and the Casquets buoy to port and feeling hopeful that we’d get round Hanois Point, the south-west corner of Guernsey, just over 10 miles from the finish at St Peter Port, before the tide turned against us. But of course we didn’t. The wind went flukey and then died, leaving us in a potentially dangerous situation just off Hanois. Our skipper decided to motor to get us away from danger, and we steered perpendicular to our desired course so as not to give us a racing advantage.

The light winds and foul tide cost us at least five hours, possibly more. We crossed the finishing line off Castle Cornet at 2.00am on Sunday morning and pulled wearily into St Peter Port harbour. 4 hours later we were off again to catch the tide through the Alderney Race. Despite the short sleep, we all felt quite refreshed, possibly because the boat hadn’t been moving for those 4 hours!

We were straight back into the watch system, James and I taking us past the island of Herm towards Alderney through a slightly misty Russel Channel. The wind built steadily through the day and into the evening and by the time we passed the Nab Tower we were in a good south-westerly force 6.  Jalapeño was surfing down the waves and for the last couple of hours we averaged well over 8 knots. Mike, on the helm, couldn’t stop grinning!

Trevor had put together a passage plan to take us up the Chichester Channel to Itchenor as part of his preparation for the Coastal Skipper course and, in the dark (10.30pm) and on a strong flood tide, he guided us safely in. 31.5 hours out, 4 hours in Guernsey and 18 hours back. Good preparation for the Fastnet!

The UK’s only veggie/vegan sailing school