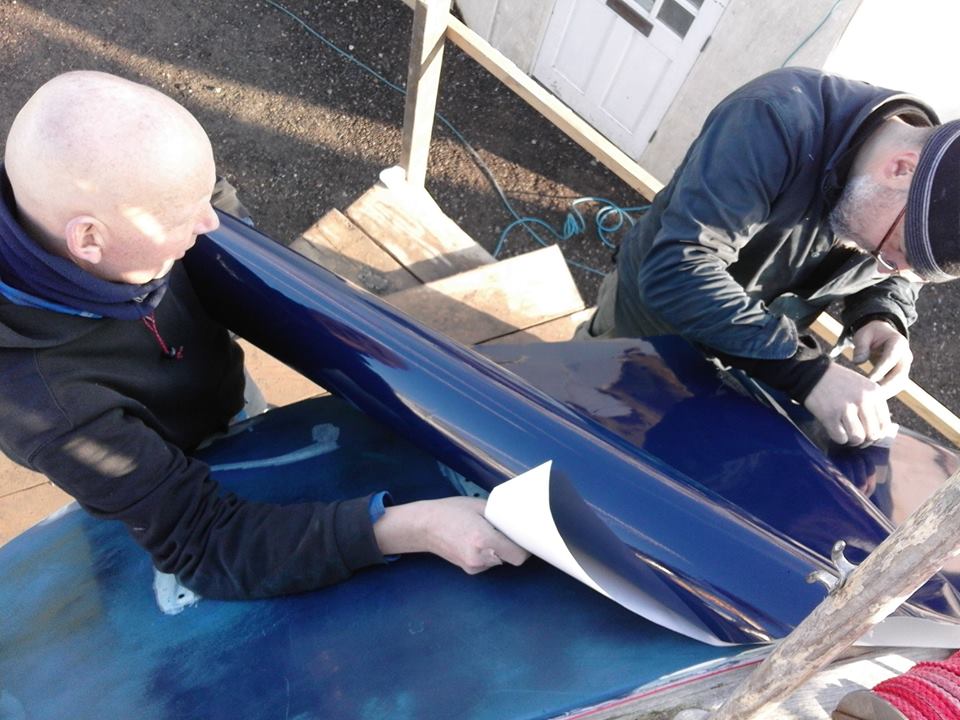 Shiver me timbers it’s been cold this month ! John here from the Sail Boat Project with the latest update on our preparation for this year’s Fastnet Race.

January has been Jalapeño-ary for many of the Sail Boat Project crew including the Fastnet team.  Lots of TLC this month, from creature comforts such as the upholstery to a new mast and rigging, a full mechanical and electrical service and a slippery new go-faster bottom!

After taking Jalapeño’s mast out in Chichester, Dhara, Krister and Paul motored her to Sussex Yacht Club (SYC) in Shoreham at the start of January when the weather was just starting to get properly wintery.  They were lucky that day as it was dry, but check out the video of them jet-washing Jalapeño’s bottom a few days later – can you tell what’s jet-wash and what’s rain?!

Once out of the water and with Jalapeño settled in one of SYC’s shiny new cradles, walkways and tarpaulins were set up and it was on with the work.  The first and biggest task was to crack on with preparing Jalapeño’s bottom for the new non-biocidal silicon-based antifoul, or rather foul-release coating as it’s more accurately known.  Sail Boat Project has been looking for a more marine-life-friendly antifoul for several years and so we were very excited and grateful when AquaMarine FRC offered to donate a hull’s worth of AquaCote to us Jalapeño’s refurb.

The idea of the foul-release coating is that, rather than kill anything that attempts to grow on the hull, as traditional biocidal antifouls do, the silicon is so slippery that nothing can get a proper grip so that all we need is a jet-wash, soft rubber scraper or just our fingers and Jalapeño will be as good as new!  The product has been used on powerboats for some time, where it becomes self-cleaning at more than 20 knots, and now they’re looking at sailing boats too.  We might not quite make 20 knots but we’ll go as fast as we can and hopefully the silicon slipperiness will give us a little extra speed!

So, the hull prep – masks, goggles, gloves, earplugs, overalls all donned, it was out with the belt and orbital sanders to take off 40+ years of antifoul and dig out and fill blisters in the paintwork to achieve a nice smooth base for the Aquacote – and leave us all looking like we’re auditioning for Braveheart with some dark blue warpaint!  Meanwhile, Trevor, one of the Fastnet crew, has been re-wiring the electrics, fitting new bow navigation lights and stripping out any redundant kit (like many boats her age, Jalapeño has been frequently updated with new gadgets, the old ones not always removed at the same time …) and, with Paul, giving the engine a full service and new coat of paint. After a bit of trial-and-error, we’ve also put brand new vinyl on her topside as well.

Jalapeño was back in the water at Sussex Yacht Club in Shoreham on Wednesday 15th February, ready to be motored back to Chichester where we will have her mast stepped with her brand new rigging. In March we’re looking forward to our training starting – we have our ISAF Sea Survival weekend which looks set to be great fun, you’ll hear more from us then!

NOTE All on-water activities are suspended until the end of June, and will restart only on advice from RYA and health authorities.